The Number Pieces of John Cage (9)

Previously on this blog, I have posted (here and here) on algorithmically generated versions of John Cage Number Pieces

, which originated from my research on the statistical properties of the Number Pieces (see here for an account of what I presented in MCM 2015). A future paper, which should appear in Perspectives of New Music, will investigate the statistical manifolds of sound properties which appear from the Number Pieces when the distributions used for choosing the starting and ending times in the time-brackets are varied.

Meanwhile, I have been interested in Cage’s Number Piece

: contrary to the previous Number Pieces I investigated, which had instrumental parts and wherein I focused on the different pitch-class sets which could appear, this one is scored for percussion. More precisely, it is a 9-minute long piece scored for three percussionist (hence the name), the time-brackets in each part requiring three different percussion instruments. Each time-bracket contain only one sound among the three possible for that part. By using the following representation for a time-bracket

can be represented as follows.

Since there is four possible sounds for each part (silence + three possible percussion instruments), there is a total of

possibilities in the whole piece, these possibilities being referred here as percussion set class, and represented as a triple

As previously exposed, one can calculate a heatmap of probabilities

of a percussion set class being played at a time t. This is represented below, with a log scale on the probabilities. 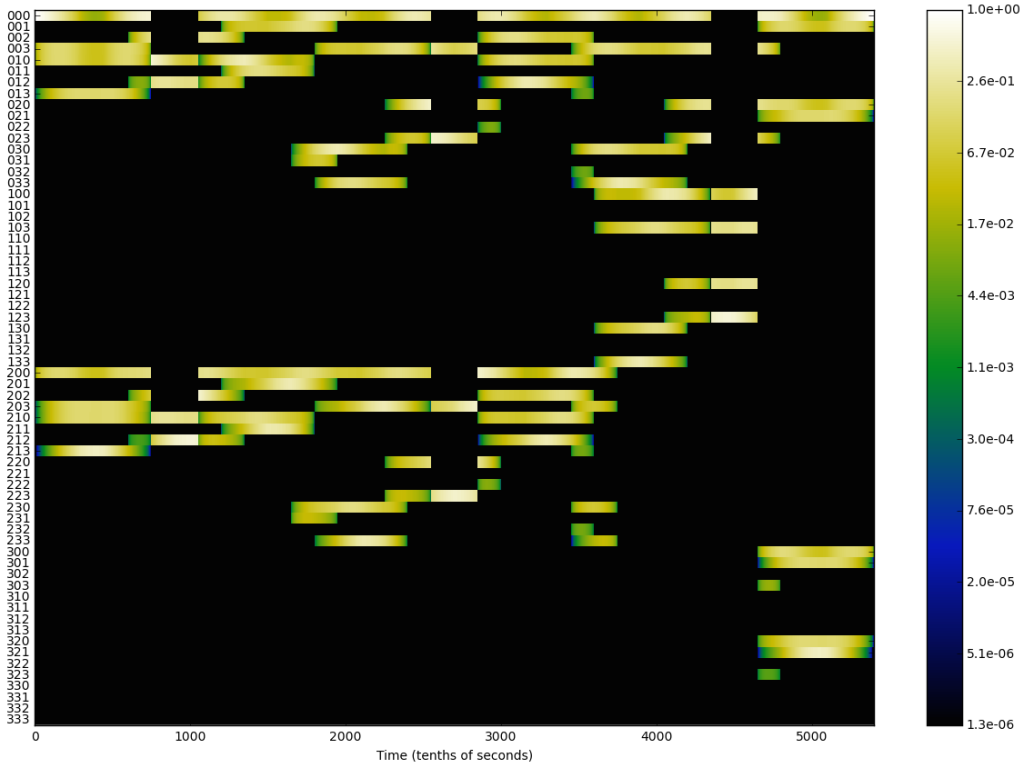 I am not quite pleased by this representation, as it artificially introduces some sort of hierarchy between the players which comes from the fact that we are representing the percussion set class as ordered triples. I’d gladly accept any advice to make it look better.

As previously observed in similar analysis, though the content of the time-brackets and their temporal locations have been determined at random by Cage, an overall structure nevertheless emerges. The effect of the fixed time-brackets are clearly visible, and the temporal shifts they introduce between parts are clearly visible in the emergence of transitory percussion set class before and after them. The possible percussion set classes also vary with time due to the varying repartition of the percussion instruments in the different parts, so that 6 different parts can be seen in this representation (not including the fixed time-brackets parts).

Finally, I have prepared and uploaded algorithmically generated versions of

on YouTube. Inspired by the percussionist Fritz Hauser, I have scored this piece for cymbals, slate stones, and paper. The first player plays three different cymbals, the second player scratches three Correzian slate stones, and the third player either plays an agitated piece of paper, crumples it, or scratches it with a pencil. I hope you’ll enjoy it as much as I enjoyed recording it !