The Number Pieces of John Cage (6)

Some time ago, I promised I would talk about the MCM 2015 conference, and the contributions I had. I will start today with my poster contribution on the statistical analysis of John Cage’s Number Pieces, which I presented also shortly as a ‘poster craze’ session. 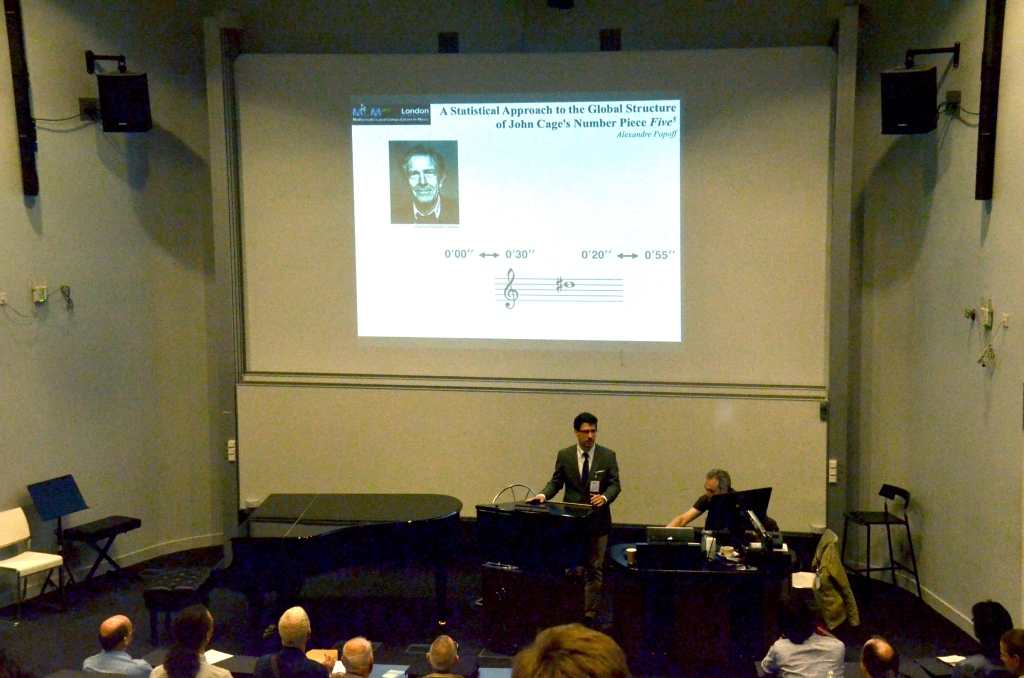 This contribution is accessible here:

From previous posts on John Cage’s Number Pieces, you may remember that Cage used a particular system, which he called ‘time-brackets’, to determine the temporal location of sounds in the piece. Here is a time-bracket:

The musician can choose to start playing the indicated F whenever he wants between 0s and 45s, and has to stop whenever he wants between 30s and 75s. Though all pitches (or sounds) are fixed, the time-bracket system still introduce a high level of indeterminacy. I proposed previously that a statistical approach would be more appropriate to study a single time-bracket, in which the characteristics of a sound (its length, its temporal location inside a given time-bracket, etc.) would be analyzed through their probability distribution (or probability density functions, for continuous cases).

The Number Piece Five5 was written by Cage during 1991 and is scored for flute, two clarinets, bass clarinet, and percussion for a total duration of five minutes. All the time-brackets contain only a single sound. The percussion part does not specify any particular instruments: since the analysis deals with pitch class sets, I therefore discarded it. If I adopt the following graphical representation for a time-bracket,

then the temporal structure of this Number Piece can be represented as such (the pitch classes are represented with the usual semitone encoding with C=0). 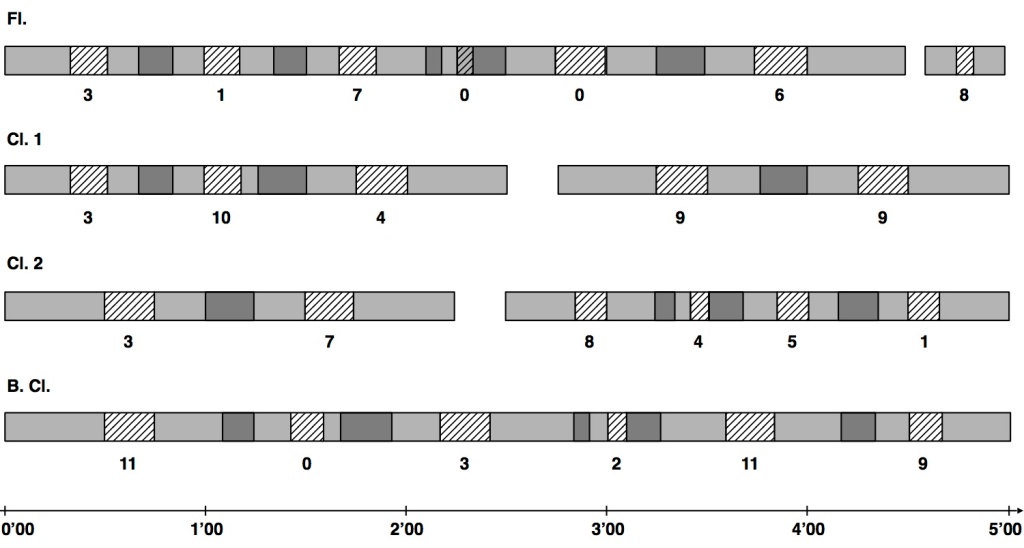 As one can immediately see, the diversity of the pitch classes, the numerous internal and external overlaps between time-brackets, and their diversity (some of them being very short, some quite long) give this work a very high level of indeterminacy. The idea is to approach the description of this piece from a statistical angle, by examining all the possibilities at each time t and their associated probability. More precisely, I am interested in the possible harmonies which can arise at each time; and I take the word “harmonies” in a very broad sense, by including any combination of sounds, following in this way a remark of Cage about his late works:

“I now think the simple togetherness of art – I mean of sounds – produces harmony. That harmony means that there are several sounds…being noticed at the same time, hmm?”

To analyze the possible harmonies in

taking its values in the set of the 49 possible set classes.

The procedure is as follows: each part is treated independently from the other (no interaction between performers, since in a real performance they would decide of their own actions), and in each part time-brackets are processed successively by selecting the starting and ending times of the sounds at random, following a given probability distribution. Here, I chose a uniform distribution (as exposed here), but other choices are possible. Time is discretized with a resolution of 0.1s, which is sufficient to approximate continuous time. The temporal location of all pitches is thus known, and for each time t, one can determine the set class

being played. By repeating this a certain number of time, one can determine by a frequentist approach the probability

of a set class being played at a time t. This is represented in the heatmap below, with a log scale on the probabilities. 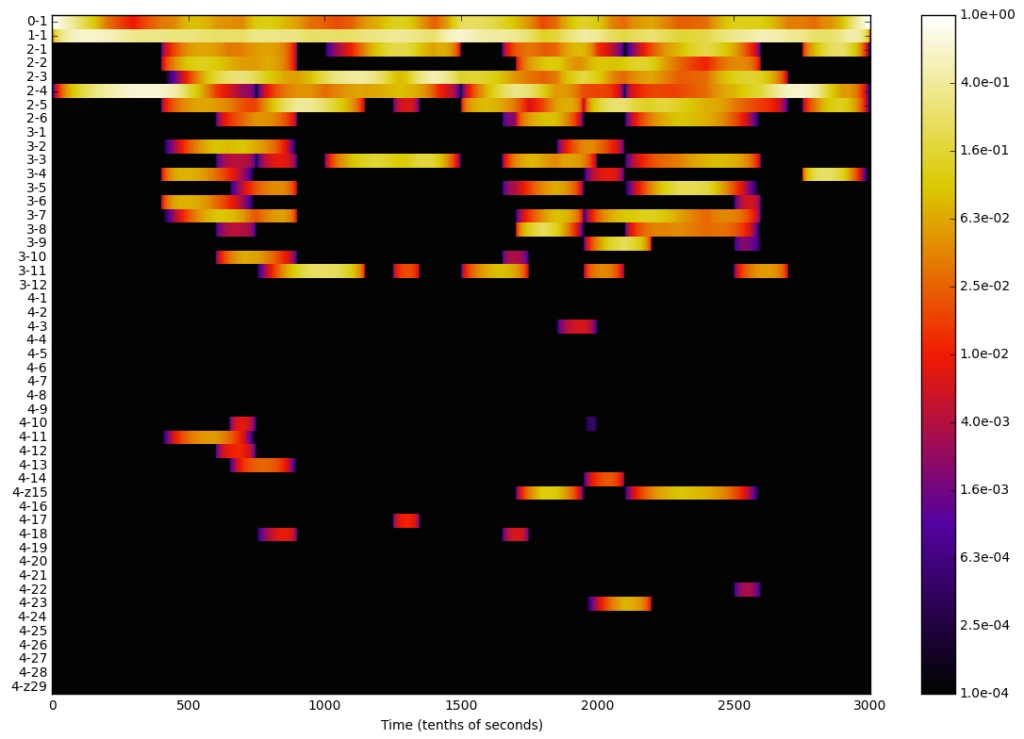 From this map, five or six different sections of varying complexity appears, which are not readily apparent from the score. While various set classes can be heard, they do not occur with the same probability. For example, the probability of hearing tetrachords in the beginning of the piece is much lower than in the end. The advantage of this representation is that one can also follow the progression of the various set classes throughout the piece. In other words, it allows to grasp at once the structure and the possibilities offered by this Number Piece, which would be otherwise quite difficult to understand given its degree of indeterminacy.

As the probabilities of hearing a given set class are known at each time t, one can use the framework of information theory to derive interesting measures regarding the structure of this piece. For example, one can calculate the entropy

of the random variable

at each time t, which describes the ‘complexity’ (in terms of the various set classes which can be heard) of the piece at t. More interestingly, given a delay

, one can calculate the conditional entropy

is being played right now. We can plot this conditional entropy in a heatmap, as represented below (the entropy is calculated in bits, i.e. with a base 2 logarithm) for a delay

is low, meaning that this set class has a rather predictable evolution. In comparison, the conditional entropy

at the same time is higher and increases monotonously, which means that this set class is rather unstable. I refer you to the paper for more details on these two cases.

In conclusion, this statistical approach is rather convenient as it allows to analyze at once all the possibilities offered by a Number Piece. Some points can be debated, for example the selection procedure for the time-brackets, or the choice of set classes to analyze the possible harmonies. In the first case, I am currently working on an approach to compare different selection procedures and their impact on the sonic characteristics of the pice. In the second case, the same framework can be reused as is to perform the same analysis at the transpositional level only; it could even be performed at the pitch class set level, though the number of possibilities would be much greater.

And finally, I wish you a very happy new year !