Can you compose with automorphisms ? Well, this is a question which is very vague, so let me be more specific. 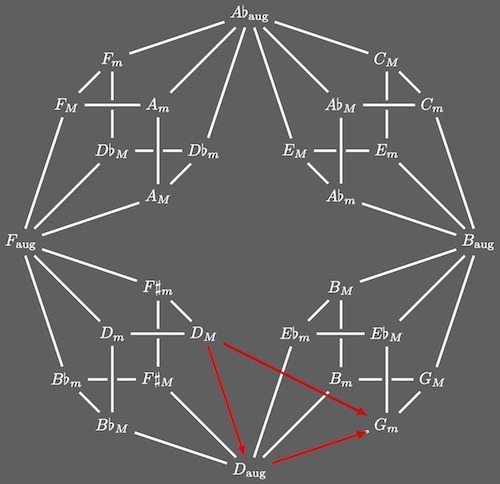 If you followed the latest posts on musical networks and graphs, you’ll surely have recognized in the picture above the ‘Cube Dance’ graph of Douthett and Steinbach. In red, I’ve highlighted the opening chords of Muse’s pop song Take a Bow.

As I mentionned at the end of this post, the whole progression of chords in the first part of this song can be described by the iterated application of a so-called complete isography on the musical network corresponding to this three-chord cell. Let’s do a quick recap: in that previous post, we defined a monoid

of relations on the set

of the major, minor, and augmented triads. It is generated by the three relations

which are pictured below. 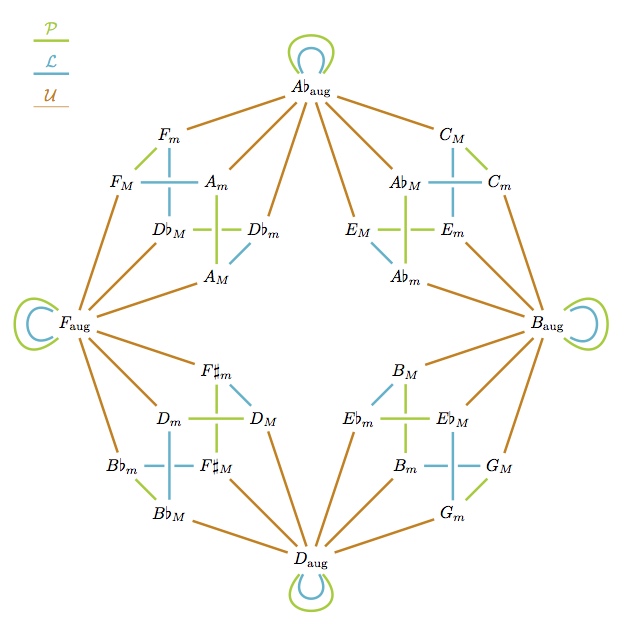 Equivalently, we can say that we have defined a functor

. We have seen that we can use category theory to define musical networks with values in

. We can then transform these networks into other networks by complete isographies: these are automorphisms of the functor

. More precisely, they are defined by the data of an automorphism

, and a natural transformation

, which in this case will correspond to the data of a bijection of the set

So, in the song Take a Bow, Muse used one automorphism of

and applied it repeatedly to get the next chords. But are there others ? In this post, I propose to (informally) compute the automorphism group of the functor

and to see how it may be used for composition.

First, we need to compute the automorphisms of the

monoid. This is actually quite easy ! The automorphisms are defined by the image of the generators. Notice that the

relations are in fact bijections of the set

is not. Therefore, they can only be sent to inversible elements of

. Thus, we obtain a homomorphism from

, and its kernel corresponds to the subgroup generated by the automorphisms in which

are left unchanged, thus reducing to the question of the image of

. An exhaustive search yields that only

are valid candidates, and we can check that the kernel is thus isomorphic to

is an extension of

. It is a matter of technical details (which I’m leaving out here) to check that

is in fact a direct product

Now this part is a bit harder. Given an automorphism

, we need to find a bijection

such that for any

(this is the definition for a natural transformation

; in an abuse of notation, since there is only one set here, I’m writing

for both the natural transformation and its only component on

Before we go any further, a little bit of additional notation. I’ve represented below the ‘Cube Dance’ graph, and I’ve identified and named in red some subsets of 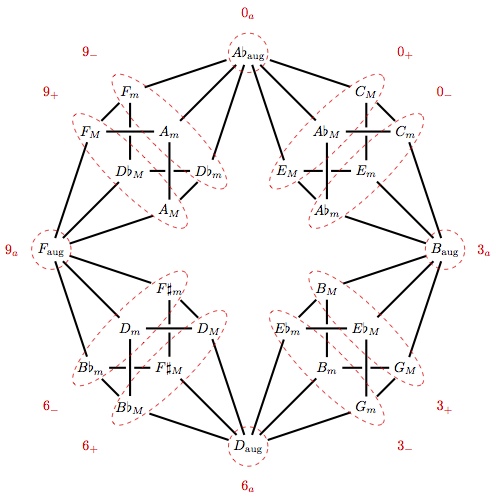 Now, assume that we have chosen an automorphism

. Let’s assume, without loss of generality, that

. We will now look for the possible bijections

. It is quite obvious that the bijection

will map the subset

onto itself. Take the element

(from now on, by another abuse of notation, I will write

for both the singleton and the single element it contains). At this point, we can freely choose its image by

is a permutation of

is related to the elements in

, so if we write the naturality condition of

in this case, we will get that

should be bijectively mapped by

(Another abuse of notation: I will now consider that arithmetic operations on

are to be understood

Notice that any subset

. So, using the naturality condition on

, we conclude that we have only two choices: either

, or the other way around.

Let’s decide that we want to bijectively map

. We now use the naturality condition on

should be mapped to

should be mapped to

I won’t detail the rest, but if you continue chasing the images of the subsets by using the naturality condition, you will end up with a complete determination of

by the image of the subsets

(the image of the subsets

are determined automatically by the naturality condition).

However, we need to determine how the subsets

are mapped bijectively to their images. Since any subset

, we can conclude that we only need to pick a representative of

and choose to send it either to an element in its image subsets. In fact, if we pick representatives in each subset

, this is equivalent to choosing for each subset

an element of the subgroup isomorphic to

By enumerating all the possibilities, we obtain the following table of the possible automorphisms of the functor

. I’ve represented for an automorphism

via the image of the subsets

are elements of the subgroup isomorphic to 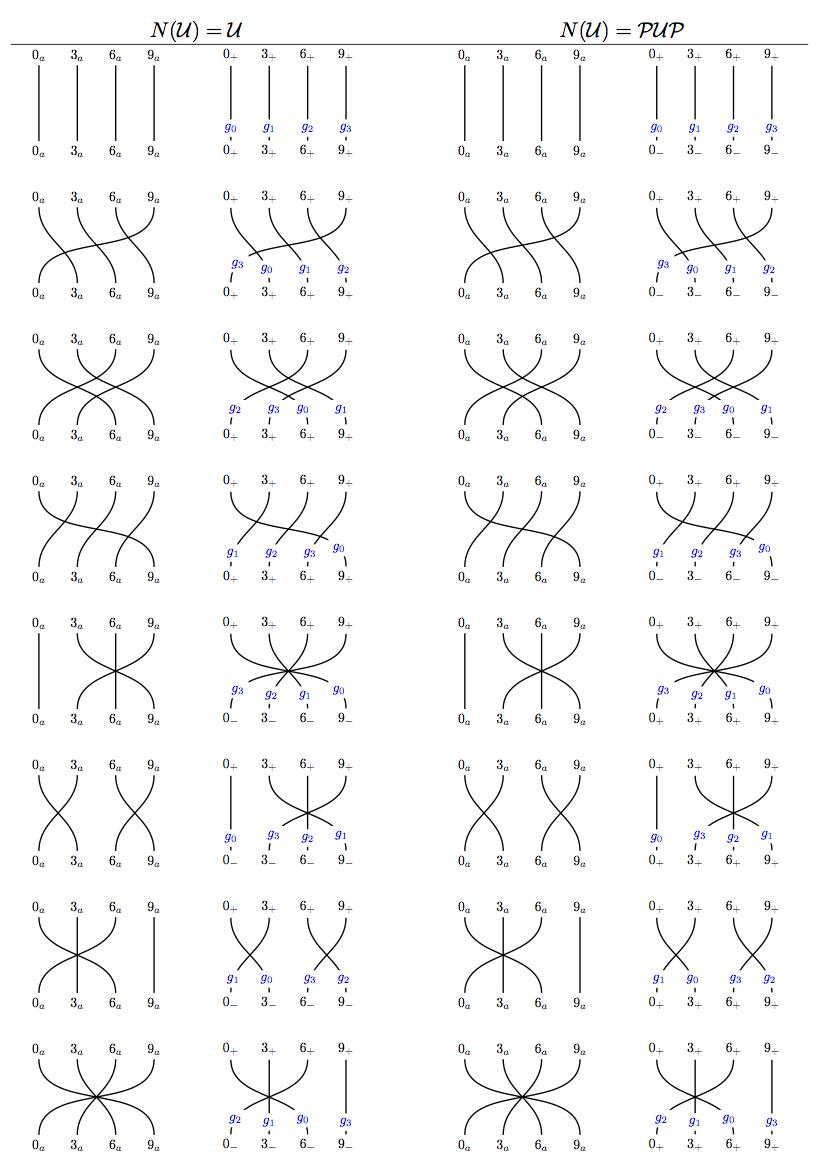 Composition of these automorphisms can be obtained by juxtaposing the diagrams, as shown in the picture below, taking care that the automorphism

applies on the group elements

All in all, the group of automorphisms of the functor

In Muse’s Take a Bow, one element of this group of automorphisms is applied repeatedly on the cell

to obtain the chords in the opening progression. Can we “compose” something else by using other automorphisms ? I’ve chosen two different elements (one such that

and the second one such that

), each of order 12, and applied them repeatedly on the same initial cell. You can listen to the results in the two videos below.

To be honest, this is not really composition (more some sort of “enumerative composition” à la Tom Johnson), but who knows ? It might be used as a creative tool for something more elaborate…